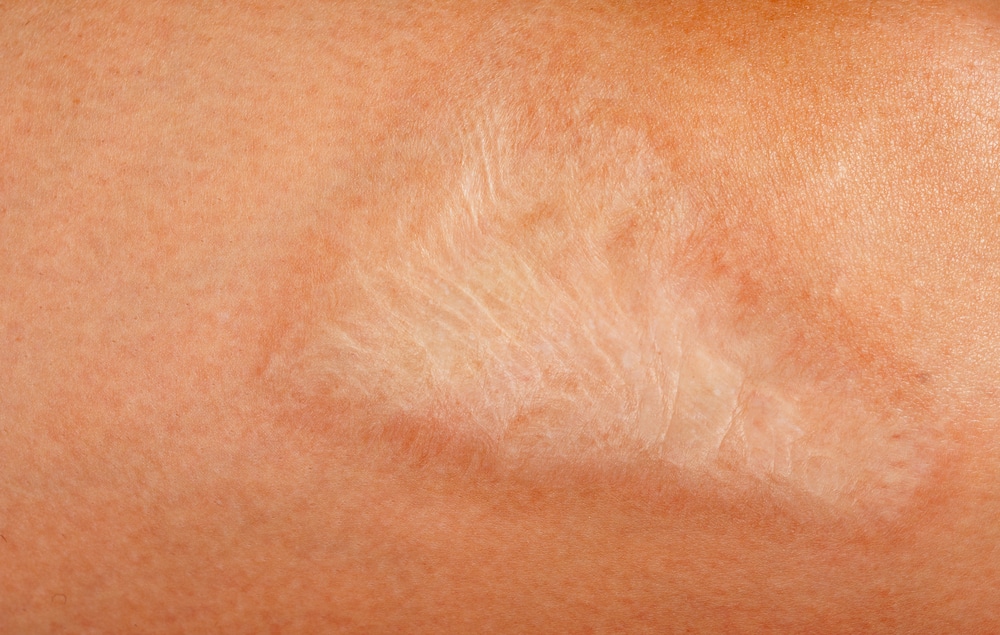 Burns sustained from thermal, chemical or electrical sources are one of the most common types of injuries and fortunately most burns are of a minor nature. Most of these minor burns are treated at home without seeing a medical professional while a smaller number are managed at walk-in urgent care centres by nurse practitioners. Whatever the cause of the burn, many burn injuries result in the formation of burn scars that may have both functional and aesthetic implications. Examples of common symptoms experienced from burn scars include an itchy sensation, tightness which may restrict joint movements especially if the scar crosses the joint and discomfort. Burn scars can also be appear unsightly and be a significant source of psychological distress which may in itself impair activities of daily living. Burn scars may appear darker or lighter than surrounding tissues and may be raised above surrounding skin or be sunken. Burn scars often have a smoother texture and can become easily irritated by extremes of temperature or minor trauma.

At Centre for Surgery, our plastic surgeons and dermatologists are experts in burn scar treatments to alleviate functional impairment and improve cosmetic appearance often using a combined treatment approach which may involve the use of lasers, microneedling, steroid injection and surgical treatment to treat these challenging types of scar.

In deeper types of burns, the underlying deeper skin structures including the sweat glands and sebeceous glands are destroyed. This often results in contraction of the scar and this can be very difficult to treat when they develop into hypertrophic or keloid scars. Our dermatologists and plastic surgeons are very experienced in the management of burn scars to ensure scars cause functional disturbances such as restriction of movement. Hypertrophic scars are typically raised and red in colour initially but do not extend beyond the original wound borders. Keloid scars differ that they also encroach onto normal healthy skin. Keloid scars require treatment with steroid injections and specialised vascular lasers to reduce their size. The Nd:YAG laser is very commonly used by our dermatologists to treat keloid scars.

In other types of scars the scar becomes depressed relative to surrounding skin and may become attached to underlying structures rendering the scar immobile or tethered. These atrophic scars may also be discoloured similar to hypertrophic and keloid scars and is often due to the influence of sunlight leading to hyperpigmentation of the scar. Other causes of scar discolouration include previous steroid treatment and through proliferation of new blood vessels or neoangiogenesis in the scar. Burns that were treated with expanded skin graft coverage  may be prone to developing an unsightly honeycomb appearance over the scar.

Burn scars in addition to being prone to development of hypertrophic or keloid scars can separately develop changes to their colour. A wide variety of treatment strategies are available for treating scar discolouration  including advice on sun protection, topical skin bleaching creams such as hydroxyquinone and laser treatment including pulse dye laser and IPL for the treatment of hyper pigmented and vascular scars.

Burns are generally of three main types which are differentiated by their depth of penetration into the tissue. The outcome of treatment is determined by the depth of the burn and earlier treatment leads to better outcomes.

Our practitioners are expert in the treatment of all types of burn scars although we do not treat active burn injuries. You are advised to seek urgent medical attention at your local emergency department in the event of sustaining an acute burn injury.

Early treatment for burn scars are aimed at reducing the extent of burns scars as well reducing the impact of functional symptoms and also to improve cosmetic appearance.

For small burn scars, steroid injections using Triamcinolone can be highly effective for non-invasive scar treatment. Often a course of 5-6 treatments is required for adequate scar treatment though will depend on the thickness and extent of the burn scar.

Ablative laser resurfacing using Erbium laser has a well established role in the treatment of a wide variety of scars including acne scars and surgical scars as part of a combination treatment approach. Laser resurfacing is also effective for burn scars without a deep and fibrotic component and where superficial remodelling of scars is the priority. The fractional ablative laser is often used to drill micro columns into scar tissue to induce collagen remodelling. This works best for superficial scars. Pain and/itching can be effectively addressed and when used in combination with physiotherapy, the skin overlying the burn scar can be stretched leading to improved mobility.

Morpheus8 is an innovative fractional radiofrequency Microneedling treatment that has shown excellent results in the treatment of deep and fibrotic burn scars that can be many millimetres thick. Morpheus8 has specialised insulated microneedles that penetrate to over 8mm into the skin and deeper subcutaneous tissue making it ideal for especially thick burn scars that require more intensive treatment. The needles emit radiofrequency energy and by doing so induce an inflammatory cascade involving a range of growth factors and inflammatory proteins including stimulation of dermal fibroblasts to secrete collagen and elastin. This leads to signicant tissue remodelling with the formation of new blood vessels via a process known as angiogenesis. Improved blood supply helps to optimise scar healing resulting in scars that are less thickness and with the potential to more closely resemble surrounding skin without the requirement for incisions, scars and downtime of invasive surgery.

In some cases, plastic surgery is used to remove areas of severe scar contracture and realign skin using scar revision surgery techniques often in conjunction with a skin graft or tissue flap for adequate coverage.

Centre for Surgery
4.6
Based on 96 reviews
See all reviews

Centre for Surgery
5.0
Based on 6 reviews
See all reviews

J S
15:51 02 Jun 21
I had a smooth procedure all throughout.Staff were very compassionate and caring.

angelika lipka
19:37 24 May 21
I had a Septo-Rhinoplasty done. My patient co-ordinator was a lovely lady called Linda, who supported me from the start and took every call, answering every question I had. She helped to reassure me and reduce my anxiety ahead of my operation and continued to check up on me post-op. My doctor was Mr Ertan Erel and I cannot stress how amazing he was. I had watched hours of YouTube vlogs and read dozens of articles about the recovery process, and they honestly traumatised me. This was completely the opposite of my experience. Due to Mr Erel’s steady hand, my face received minimal bruising and swelling all of which was gone within 8 days post-op! During my recovery I continued to receive regular check-up phone calls from the team, mainly Gregory. I’m in love with my results, even though I’m still in the early stages of recovery. If you’re thinking about selecting this surgery, I would certainly recommend them due to the support they offer, amazing customer service and care they put into their procedures!!

Hanna Berry
21:42 18 May 21
I had a breast augmentation 6 weeks ago. And I couldn’t be happier! It’s the best choice Iv ever made! They have dropped and look so natural I feel like the old me. The me before kids. The recover was around 5 days of feeling abit high from all the meds but I was never in pain and from day 6 I was honestly back to normal. Of course I took it slow but I was so happy nothing else matters. Thank you so much Dr. Tillo and the amazing staff kind and caring staff at centre for surgery! What a pleasant experience from start to finish!

Holly Miller
10:55 30 Apr 21
I had a BBL with Dr Omar Tillo, and the results have far surpassed my expectations! I’m so pleased with it and my recovery went well with no problems. His body contouring skills are genius! The whole process was very easy and the aftercare was great. Everyone was friendly, welcoming and made me feel at ease at the centre. My patient coordinator Carolyn was brilliant too!
Trustpilot

Home / Burn Scars Treatment
Call us
Email us
Find us